Why rework and rewriting matter

Whatever content you're creating, it probably needs reworking before it will really sing. By David Walker.

Rework is a broad term covering all the structural alterations to a piece of content after the first draft.

More and more people are recognising rework's importance. Great content does not simply spring fully-formed from the head of a resident genius. Most of the time, it goes through a process that moves it from good to great.

Some people rework instinctively. At Shorewalker DMS, we have tried over the years to understand rework as a process. We've tried to find out as much as possible about the rework process.

Former McKinsey consultant Ameet Ranadive has written that he learnt an important lesson at the consulting giant: writing clarifies thinking.

Writing about ideas forces us to:

This last point may be the most important. When we write, we must choose the ideas we really want to invest in persuading people about.

Writes Ranadive: "Each week we were producing decks to share with clients — however, I noticed that some of the slides we were creating never made into the client presentation." His colleagues explain that the process of writing those slides forced them to confront which ideas were worth putting to clients. His takeaway: "Be prepared to write stuff that doesn’t see the light of day with others".

It's all in the reworking

McKinsey is far from alone in recognising rework's central role. Rework courses through every type of creative work, from 15th century Italian painting to today's PowerPoint presentations and TV shows and movies.

Merrill Markoe, head writer for the Letterman TV show, puts it concisely in a tweet. "Everything worth reading is done in the rewrite."

She adds: "My harsh writing advice is this: Write a fast and terrible first draft, then put it down and walk away. Next time you read it, you'll see that all the baloney has risen to the top so you can scoop it off and replace it."

Markoe's point is that rework is not a nice-to-have. It's an essential part of the process.

Pete Docter – the director of Pixar's Monsters, Inc. and Up – put it at greater length in a handwritten letter to a boy named Adam. Docter's response is one of our favorite commentaries on the creative process, and all the better for being drawn.

Adam takes up the story (this is extracted from his blog post):

I sent Pete Docter (the director of Monsters, Inc. and Up) a letter. I told Mr. Docter about how much I admire him, my aspirations for a possible career at Pixar, and I asked if I could get something small signed by him ... Well, this time I got more than I expected. Here is what I received from Pete Docter, one of the most influential and important people at Pixar, the best animation studio on the planet ... 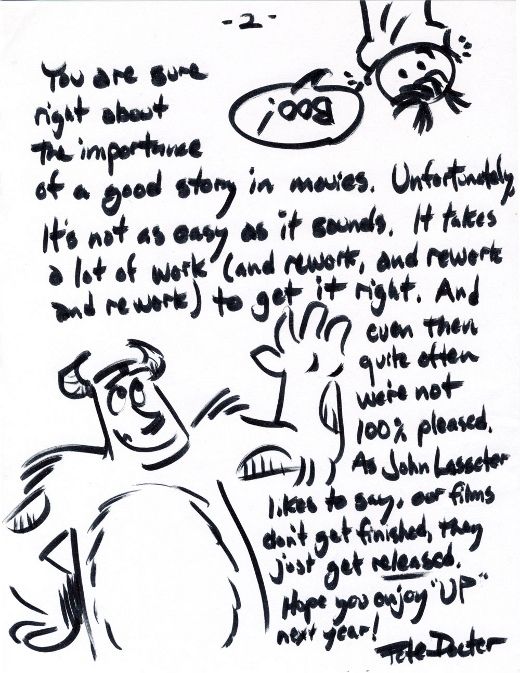 "You are sure right about the importance of a good story in movies," Docter replied. "Unfortunately it's not as easy as it sounds. It takes a lot of work (and rework, and rework and rework) to get it right. And even then quite often we're not 100% pleased ... our films don't get finished, they just get released."

Pixar understands the importance of rework better than most. The movie Toy Story made Pixar a household name. Yet its script was in rework for five years before Pixar management were ready to let the computer modellers start creating its images. In that time, Toy Story transformed into a buddy movie about Woody the lovable cowboy doll and Buzz the plastic cartoon astronaut.

But that was not how Toy Story started. The hero of the first draft was Tinny, a one-man band doll; his offsider Woody was a ventriloquist's dummy.

Writers reworked that draft until the Woody character became a doll. But in the rework, he also became the story's villain; he kept the other toys in line with the help of a vicious toy dog, until the other toys ganged up and threw him out the window.

Writers reworked that draft several more times too, seeking to move it from might-have-been-good to great. Eventually the production team hired several skilled outside writers to help them rework it even more. One of these writers was Joss Whedon, now famous for Buffy, Firefly and the Avengers movies, but then a sitcom writer with a reputation for rework success.

Whedon reworked the Woody-Buzz dialogue, throwing much of it out. He also came up with crucial new ideas, such as Buzz's inability to believe he was a toy.

Note that the work done on Toy Story went well beyond what Markoe, the Letterman head writer, called "replacing the baloney". Not once but several times, Toy Story was subjected to a full rewrite. The fundamental idea survived: in a world where toys come alive, a group of them face an existential challenge. But almost everything within that idea was changed.

To make content truly great, we believe, takes commitment to work at finding new ideas and refining old ones. It takes a willingness to write material which never sees the light of day. As Pete Docter advises: "rework, and rework and rework".

Sometimes the need for rework appears right at the end of the creative process. The 1977 movie Star Wars was a mess when George Lucas screened it for a group of friends – a group which included Martin Scorsese. Lucas's then wife, Marcia, an accomplished film editor, went to work to rescue her husband from a career-ending disaster.

Marcia Lucas eliminated, re-cut and re-ordered scene after scene. She even went as far as to artificially manufacture, out of random footage and overdubs, a vital new plot element: that the Death Star was about to destroy the Rebel base. Take a look at this analysis:

Sure, George missed out on an Oscar. But Marcia (along with two co-editors) won Best Editing. Don't you just love happy endings?

This article is being reworked

Rework is not some admission of defeat. It's an important recognition of reality, a sign that you know the road to content success.

Everybody would like to get it right the first time. Professionals understand that this rarely happens. The content you're reading now has already been reworked, and will be reworked again. The same thing probably needs to happen to your content.

And yes, Shorewalker DMS can help with that. Give us a call or drop us an email.

Great work does not simply spring fully-formed from the head of a genius. Most of the time, it goes through a process that moves it from good to great.